I am shocked no one sees it. I am EXCITED! It’s an upwelling… a surge. A wave BIGGER than anyone can see. The earthquake was MASSIVE, and he continues to damage our Country. But the wave it caused is deceptive. As it approaches shore, its SIZE will become apparent! 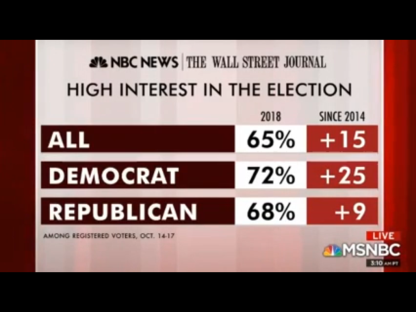 Voter enthusiasm is high! Voter turnout is at record highs! BOTH Democrat and Republican, excited to vote FOR our basic human rights! NO ONE is excited to go vote for anything supporting Trump’s agenda. Republicans were biting the bullet, and those who despised the MORAL DECAY planned to stay home November 6th.

… but then the Kavanaugh hearings happened.

NO Republican Senator STOOD UP for a victim of sexual assault. NO Republican Senator believed the POWERFUL testimony, under oath, before Congress and the World, of Dr. Christine Blassey Ford. And NONE of them can give a clear answer as to why. Key witnesses were ignored. Credible allegations ignored, perjury dismissed as partisan attacks, politicians IGNORING the SAFETY and WELLBEING of 50% of their constituents. The blatant disregard for the Rule of Law and the wholesale liquidation of Our VALUES as a Country now demands… everyone must vote.

THAT is the surge in Republican enthusiasm. It is painfully obvious to anyone who values Our Constitution… Why am I voting? Because our CURRENT elected officials stand impotent in the face of an imminent threat to our National Security. In fact, IF you watch the actions of the Leader of the Republican Party, our elected officials seem to be AIDING our foreign advasries through INTENTIONAL INACTION.

If you SEE something, SAY something!

So the stage is lit, and the players are at their marks. We see how the story must go. And of course, as has been the constant recurring central theme throughout this entire fiasco, a group of refugees numbering close to 7,000 is making its way HERE, to Our Country… to Our Home. Asking for SAFETY. Asking for a CHANCE…

What are YOU gonna tell them? Would you turn them away? Because that would be, at least, compassionate… compaired to what the President and the Congress and the Justice Department and the Department of Homeland Security have planned for FAMILIES, REFUGEES… a huddled mass yearning to be FREE.

THIS is the easy part! The unity, the comradery, the “Democracy In Action!”… Pull the Lever and Make a Difference!

AFTER the election… THAT is where the work begins. That is where our mettle will be tested. When the votes are counted and the SHEER SIZE of the rejection becomes apparent… what do you think HE will say? Hmmm…

“More people voted for the Democrat candidate than there are Registered Democrats! RIGGED ELECTION!”

He’s going to test the RESOLVE of the American People. He’s going to STAND, bald-faced, blustering, and barbaric, telling everyone “It’s ‘THEM’! ‘THEY’ did this! ‘THEY’ are trying to take away your ‘THING’ or ‘STUFF’! No Republican would EVER vote against ‘America’!”

STAND… do NOT be silent… in for a DIME, in for a DOLLAR. United, we have stood on shores more dangerous than this, more drenched in blood than we have seen SO FAR. And the lessons that they missed BEFORE we landed at Normandy must be remembered NOW-

STAND UP for the Rule of Law Everytime. Every where.

And now we MUST add- Equal Means Equal. Because the division stoked by friend and foe alike within our society is fueled by hate and fear, Eliminate the divisive talking point. Race, gender, religion…

We discriminate against others AT OUR OWN PERIL. If it isn’t obvious NOW… just wait until November 7th.