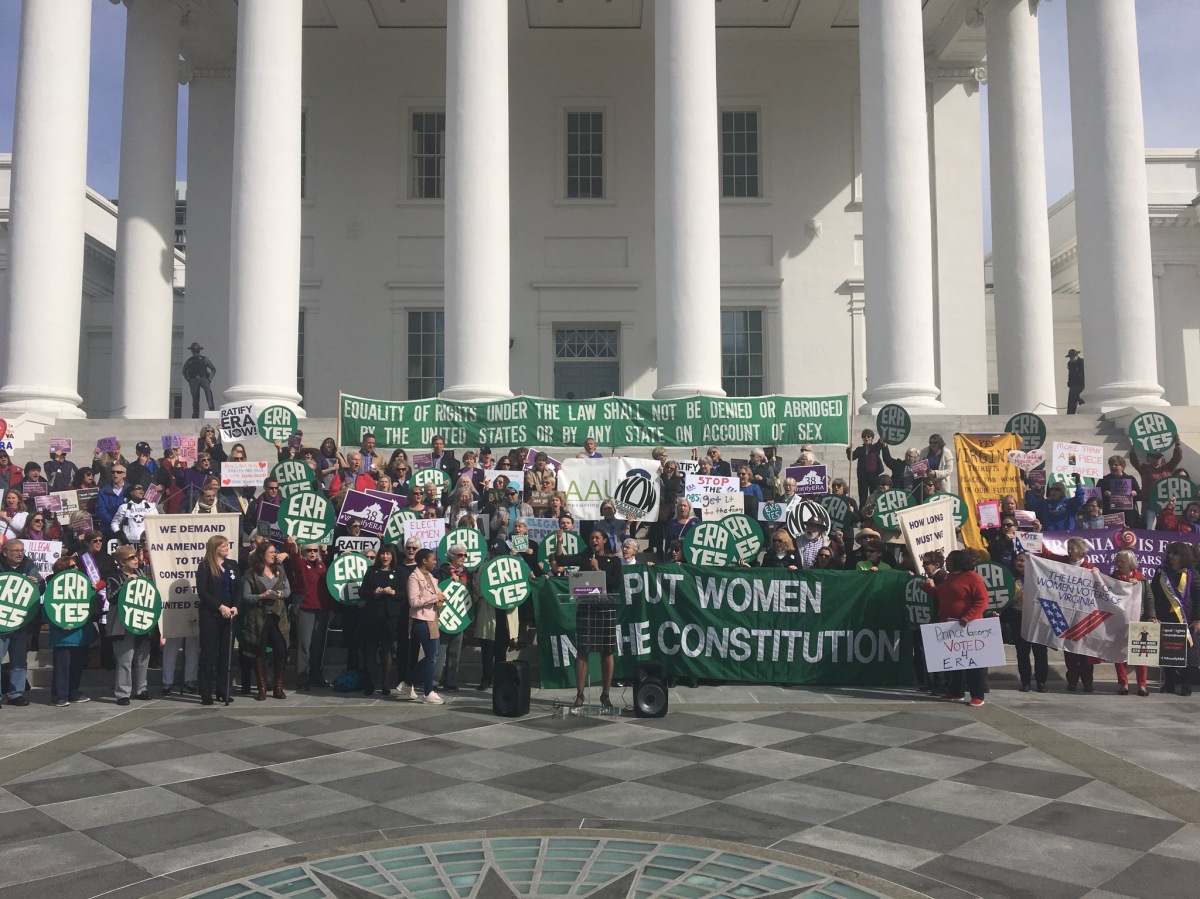 That was the vote in the Virginia House of Delegates on February 21, 2019, on a proposed rule change that would have forced a vote on ratification of the Equal Rights Amendment…

A bill supported by over 80% of the people of Virginia. It would have PASSED had a vote been allowed… but it wasn’t even allowed out of committee.

ONE YEAR LATER, after the delegates were held accountable at the ballot box for their INACTION in the legislature, Virginia voted to ratify the Equal Rights Amendment, thereby meeting the Constitutionally required threshold of 38 States.

Just last month, the United States House of Representatives voted to clear the way for final ratification by removing the original deadline, and now…

ONE MAN, in the United States Senate stands OPPOSED.

While it was shocking to see the Virginia Speaker of the House deny equality to more than HALF of his constituents, it was even more shocking to see the Democratic Presidential Candidates stand SILENT as it played out. FIVE WOMEN. 37 States. Only one more to go…

What a lost opportunity to educate the public… about Equality and the legislative process. About Income Inequality and Economic Disadvantage.

A lost opportunity to bring us closer to that more perfect Union.

I have NO DOUBT that if the Democratic Women running for President would have stood on the steps of the Virginia Statehouse in solidarity with the ERA activists, they would have swayed ONE MORE VOTE. With the national media bringing SUNLIGHT to the situation, we would now be standing one year CLOSER to equality.

Then again… we would STILL be standing right HERE, no closer than we are TODAY.

The Majority Leader of the United States Senate does NOT support equality.

The Majority Leader of the United States Senate stands OPPOSED to the MAJORITY of this nation.

The Senate Majority Leader is opposed to the Rule of Law, as conceived by the Founders of this nation, and will not move to ratify the Equal Rights Amendment.

It does not matter his rationale, the PEOPLE have spoken.
Equality should be the Law of this land.

The Senate must Ratify the ERA.

When storms rage, you cannot simply seek SAFE HARBOR, as your ship will be smashed upon the shore. You must sail headlong into the winds and face it, with full faith in the strength of your ship & its crew… and press ONWARD. Even if that means just treading water, because the alternative…

In years past, leaders have spoken of the ‘Fog of War’. In this digital era with the adversary we are engaged with, the entire WAR is FOG. There is no battle. There are no physical sides being drawn.

When we forget who we are, and what we STAND for… our enemies win. When we begin to selectively administer Justice and forget that we are ALL created equal, we FALL BACK… being pushed closer to the rocky shores of our PAST.

We know where we have BEEN. We must remember where we are GOING.

Well-trodden paths are safe and familiar, but they will only lead us to where we’ve been… back to where we are TODAY. Even in the dark of night, even in the deepest fog… we know our path is TRUE when we listen to our moral compass, as it always points us HOME.

We cannot allow ourselves to be complacent. We must fight to hold on to what we’ve already secured. The Constitution outlines a process for RATIFYING Amendments to the Constitution, it does NOT outline a process where ONE MAN can override the overwhelming majority of the PEOPLE.

Anyone who stands opposed to the opinion of 76% of this nation, should not be referred to as Majority Leader… and this fall, the PEOPLE will show him that.

Equal. MUST. Mean. Equal… or we will lose this fight before it’s even begun.