22 Veterans commit suicide everyday in the United States of America.

Is it a lack of leadership in the VA? Is it the political games played by elected officials with the FUNDS allocated for their care? Is it a lack of opportunity back here in the States when they’ve finished deployment? Is it an incompatibility between training received in the military and training required in the private sector?

While I believe all of these play some role, I believe it’s DEEPER than that. I believe pride in our mission objectives has been lost. When we see our soldiers ordered to abandon a key ally, abandoning families and communities… we see only a small piece of an even larger, camouflaged problem.

When it’s reported that FUNDING for military defense in Ukraine was being withheld until their government complied with demands made by OUR elected officials, remember… there’s MORE to that story. What’s NOT being reported? We are lucky that we have this SMALL glimpse of what is being done in our name. They stored transcripts of conversations in a highly classified server in the White House, specifically conversations they KNEW could put them in legal jeopardy…

What else is on that server?

The corruption suffered in our government now bleeds over into our military, forcing men and women of HONOR to do DIS-honorable things… because they know the dangerous place where we STAND today, and they want this nation to endure.

Blood AND treasure expended… and members of the Senate say, “The President did nothing wrong. I see no quid pro quo. Well OF COURSE I didn’t read the transcripts… even if I did they would show he did nothing wrong.” 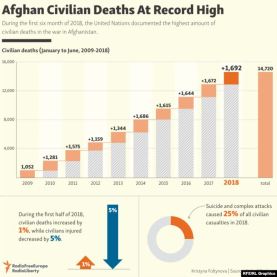 … and we STILL fight in Afghanistan.

Would President Trump have asked Osama Bin Laden for dirt on his political opponents? Would the GOP find THAT acceptable? What IS “acceptable”? Is there NOTHING sacred to them anymore, other than retaining POLITICAL power?

What would it take… is there STILL a red line that no one should be allowed to cross?

STAND UP AND SPEAK OUT!

Thank you to the brave men and women of the United States Armed Forces for securing my right to STAND here today and do just that. FOR THEM… let us restore HONOR in our mission abroad and hold OURSELVES accountable, raising the bar for everyone else.